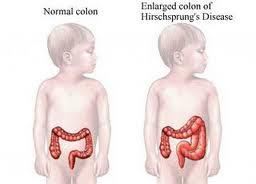 Hirschsprung's disease is a blockage of the large intestine due to improper muscle movement in the bowel. It is a congenital condition, which means it is present from birth.

Symptoms that may be present in newborns and infants include: